Buds or Bytes? Cannabis Companies Today Speak like Tech Companies Did in the Late ’90s

The dot-com bubble was a period of enthusiastic speculation about the future of the “World Wide Web”. The period was accompanied by a run-up in the stock prices of companies offering internet-related products and services. The bubble in the stock market peaked and crashed in the year 2000. Some companies like eBay and Amazon.com survived the crash but many others did not.

A number of pundits have compared the rise of cannabis in 2017 and 2018 to the dot-com bubble in the late 90s. Are they right? We take a fresh look at the question by examining linguistic similarities and differences between the public disclosures of dot-com companies in 1999 and cannabis companies today.

In our last piece, “Weed & Words: A Quantitative Analysis of Cannabis Disclosure”, we used machine learning to parse and understand the 2018 annual Management Discussion and Analysis (MD&A) of 35 cannabis companies and 70 more established companies in different industries. The primary findings of the piece are summarized below:

Much has changed between 1999 and 2018. Public disclosure practices and regulations have changed dramatically over the last decade. Therefore, directly comparing disclosure for fiscal year 1999 to fiscal year 2018 would likely offer little value. Instead, we compared the disclosure2 of 22 companies who were offering internet-related services, and were caught up in the dot-com frenzy, against 22 companies operating in more traditional industries in 1999. The two groups have approximately comparable market capitalizations and all companies were listed in the United States. In our analysis we focus on the same attributes for the dot-com companies and their comparators as were relevant for the cannabis companies and their comparator group.

We identified a number of similarities in the distinguishing features of dot-com disclosure and cannabis disclosure: 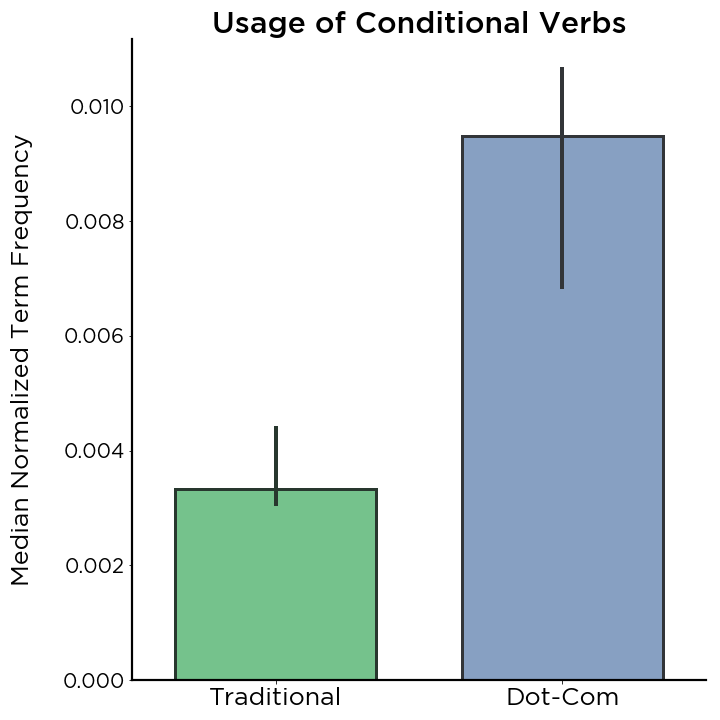 We identified one striking difference: 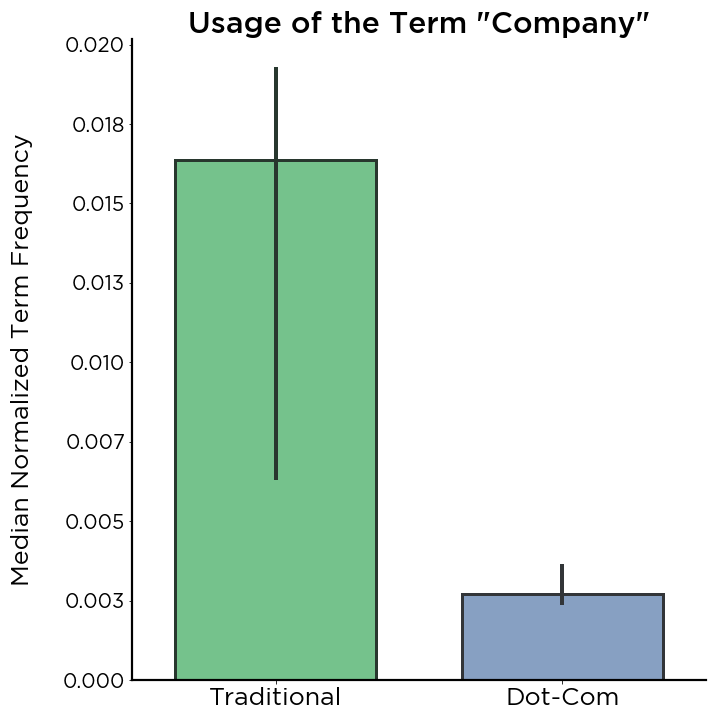 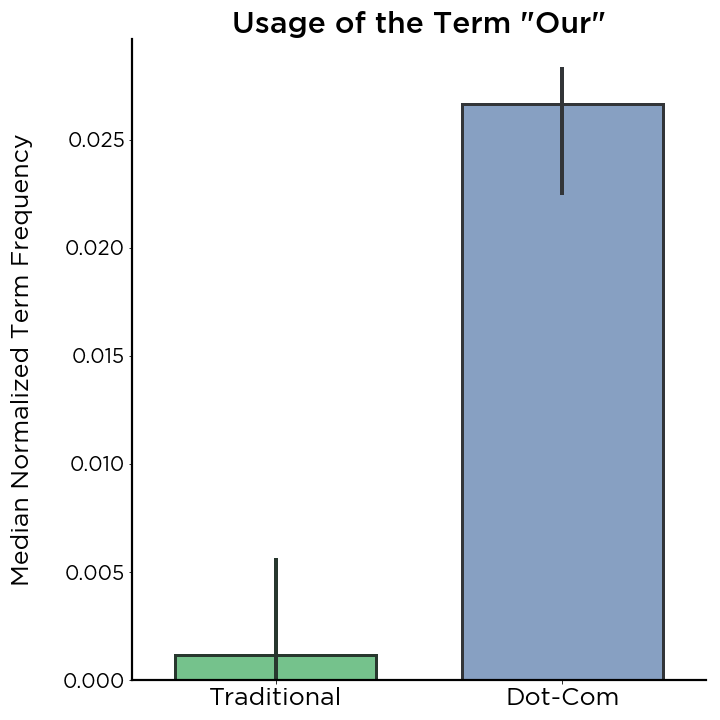 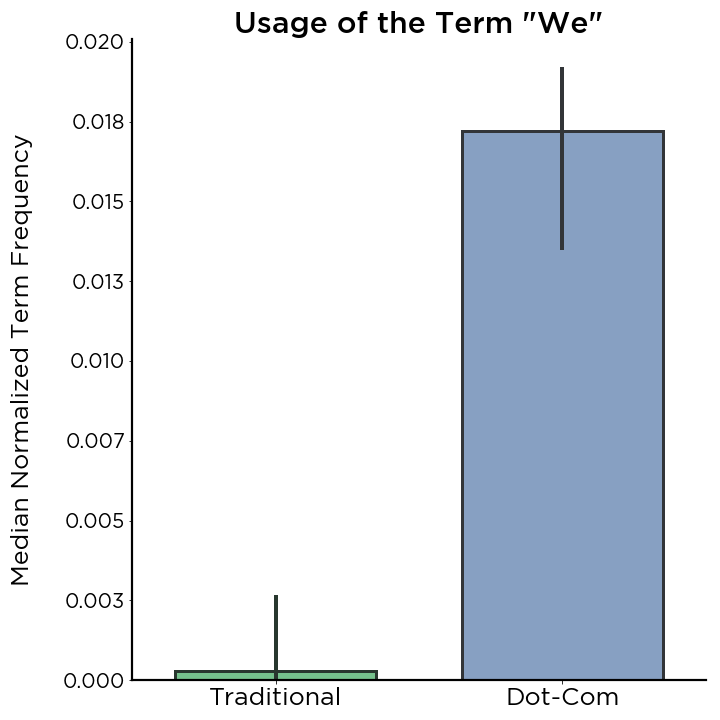 What Does this Mean?

The similarities between cannabis companies and dot-com companies show that both industries indicated relatively high levels of uncertainty and risk in their disclosure, when compared to their more established peers. Uncertainty and risk is conveyed, at least partially, through the usage of conditional verbs like “may” and “could” and is also evidenced by the high frequency of the phrase “material adverse effect”.

It is difficult to say why both cannabis and dot-com companies used higher proportions of “stop words” than their counterparts. In “Weed & Words”, we conjectured that it could be due to the use of promotional language, less sophisticated drafting or the fact that veteran companies are forced to express themselves economically in order to explain more complex concepts. All of these hypotheses could apply equally to the dot-com industry.

The most perplexing result of our analysis is the fact that cannabis companies refer to themselves as “the company” far more frequently than their comparator group but dot-com companies refer to themselves as “the company” far less frequently. It is surprising that in both cases the differences between the two groups are so stark. One might assume that reporting norms have run through a cycle. In 1999, perhaps established companies felt compelled to be formal in their speech whereas in today’s environment they feel the need to be collegial. In addition, technology companies have been known to take a more informal approach in a variety of contexts and continue to do so today. The same may not be true for cannabis companies.

The linguistic attributes discovered in both groups could describe new companies with higher risk profiles rather than industry-specific anomalies. Regardless of the reason, the stark differences between burgeoning, high-growth companies and more established companies is intriguing.

Why Does this Matter?

The language used in disclosure documents has been shown to be related to outcomes like regulatory enforcement actions and firm performance. Whether intentionally or unintentionally, management communicates important information to stakeholders not only through content and but also through linguistic cues. Comparing the linguistic features of burgeoning industries provides a fresh view of risk profiles and disclosure drafting techniques.

Why Compare Dot-com Companies to the Cannabis Industry?

At the turn of the century, an internet-based company was a relatively new concept to the average investor. Dot-com companies attracted enormous amounts of capital but few people understood how these companies could or would turn a profit. Cannabis is newly legal in Canada. However, it is not novel in the same way that way that the internet was. At their core, cannabis companies grow, package, and sell a product to consumers. Even so, investors face challenges when evaluating cannabis companies. It is difficult to assess how and if companies will hit their production and revenue targets. There is no historical data, no proven business model and significant regulatory uncertainty. Because of the newness, uncertainty and, above all, the excitement around the cannabis industry many have compared the industry and the dynamics of the markets to the dot-com bubble. Our analysis lends some credibility to this comparison. The similarities in the diction of dot-com and cannabis companies may reflect these parallels.

The Intersection of Governance and Data Science

This piece is part of an ongoing series that aims to explore the intersection of data science and the latest trends and top-of-mind issues for boards, investors and governance professionals. Hansell McLaughlin Advisory Group’s team of data scientists and analysts, in collaboration with other professionals within the firm, provide depth and insight into real corporate governance challenges. Our advanced analytics capabilities, combined with our expertise working with boards on legal, governance and communication matters, allow us to provide insightful and actionable advice that leads to better corporate decision making.

1 References to “frequency” refer to normalized frequency, i.e., the total count of a word or phrase divided by the total number of words or phrases in the document.

2 In this piece we analyze selected text from the U.S Securities and Exchange Commission (SEC) Form 10-K for the fiscal year ending in 1999. We included only the text in Section 1 “Business” and Section 7 “Management’s Discussion and Analysis” in our analysis.

3 Three word phrases were assessed after removing stopwords and stemming all lowercase words.