Over the past two years Canadian investors have given a hearty welcome to the cannabis industry. Although only a few cannabis companies booked a profit in 2018, stock valuations have been high. The industry has also attracted naysayers and short-sellers, of course. As debates about the state of the cannabis industry continue, we wondered what cannabis companies have to say about themselves; and if they are saying it any differently than the Canadian industries with which investors are more familiar.

This piece is part of an ongoing series exploring the application of a variety of data science disciplines to the field of governance. Our first piece in the series explored the CEO letters of Warren Buffett and others. This series seeks to examine the ways machine learning and other new technologies can augment analysis and uncover insight.

Cannabis companies are operating in a new environment with unproven business models and their disclosure will tell you so. In fact, “material adverse effect” was the most common three letter phrase found in the cannabis MD&As after “Management Discussion & Analysis” and “year-ended December”.

While the word “risk” is much more frequently found in veteran, large-cap disclosures (keep in mind that risk management discussions frequently use the term), uncertainty is reflected in cannabis MD&As in other ways. For instance, the cannabis companies studied used conditional verbs like “may” and “could” far more often than the veteran companies, big and small. The median, normalized proportion of conditional verbs in cannabis vs. veteran disclosures is about two to one. 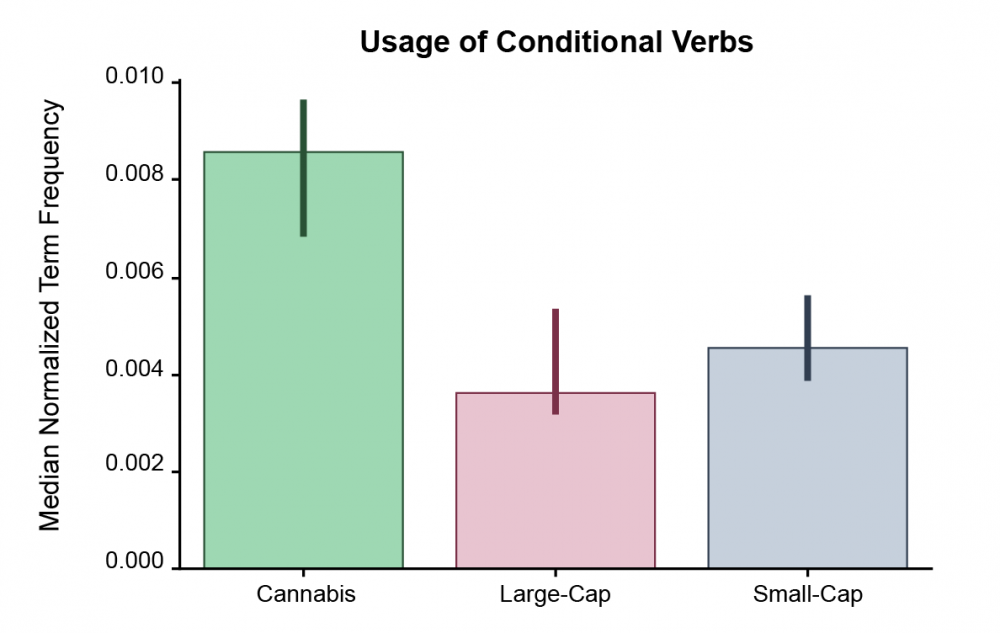 Simple linguistic characteristics, such as the average length of words, can distinguish a MD&A published by a veteran company from that of a cannabis company. Unsurprisingly, there are more marked linguistic differences between large-cap MD&A disclosures and cannabis disclosures than between small-cap and cannabis disclosures. For instance, the large-cap, veteran companies we studied generally used more varied words and sentences (i.e. their word and sentence lengths had higher standard deviations) than both cannabis and small-cap companies.

Interestingly, cannabis MD&As differed from both large and small-cap, veteran companies in using a significantly higher proportion of “stop words”. “Stop word” is a term used in computing; it refers to high frequency words that do not convey a lot of meaning like “because”, “and”, “the”, “be”, “that”, etc. Using just the proportion of stop words employed in the MD&A, we were able to predict whether or not the MD&A belonged to a cannabis or a large-cap company with about 85 percent accuracy and distinguish between a cannabis and small-cap company with 75 percent accuracy. The large proportion of stop words in cannabis MD&As may be attributable the use of promotional language in cannabis disclosure or, perhaps, to less sophisticated drafting. It may also reflect that veteran companies have more complex concepts to disclose and may therefore be more economical in their choice of language.

It will come as no surprise that cannabis companies use a vocabulary distinct from other industries. For instance, the words “cannabis” and “medical” appeared frequently in the cannabis disclosures and close to never in the disclosures of the 70 veteran companies studied. However, other differentiating words and phrases are less predictable.

We analyzed which words have the most power to distinguish between cannabis and veteran disclosures by looking at a statistic called chi square. After “cannabis”, the most discriminating term was “company” which appears considerably more frequently in cannabis MD&As. Both large and small-cap cannabis companies are considerably more likely to refer to themselves as “the Company” throughout their MD&A while veteran companies are more likely to use words like “we” or “our”. Could this suggest that the board and management in the cannabis industry identify differently with the business than is the case in more established industries? 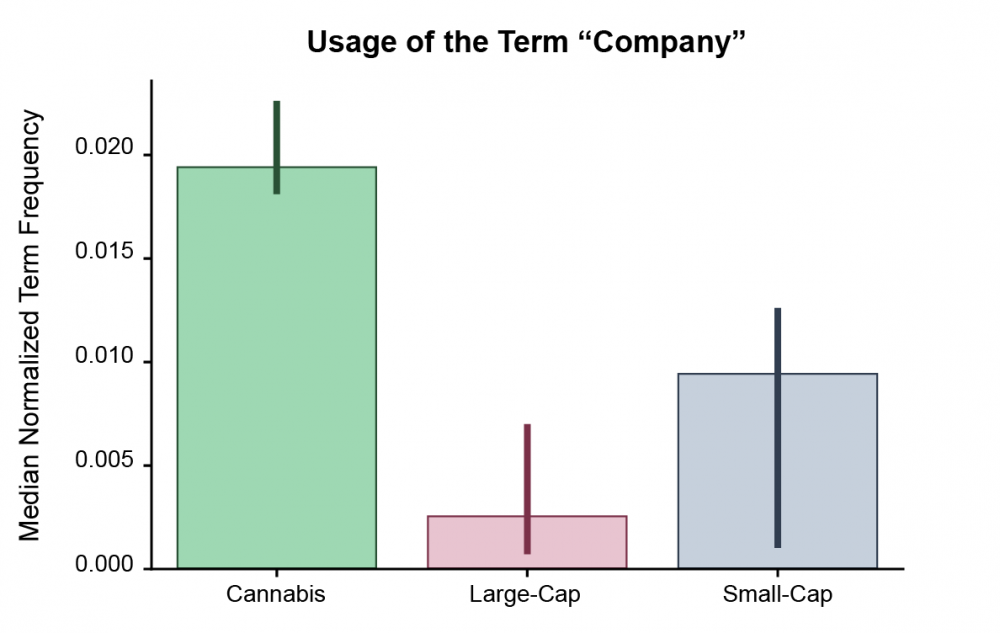 Words indicating that the disclosure belongs to a veteran company include “million”, “earnings”, and “tax”.

As the cannabis industry grows and becomes more mainstream, we look forward to seeing how their disclosures evolve. Join our mailing list to follow the evolution of the industry with us. Our next piece will explore differences and similarities between cannabis and “dot-com” companies, given the parallels that some have drawn between the industries.

The Intersection of Governance and Data Science

This piece is part of an ongoing series that aims to explore the intersection of data science and the latest trends and top-of-mind issues for boards, investors and governance professionals. Hansell McLaughlin Advisory Group’s team of data scientists and analysts, in collaboration with other professionals within the firm, provide depth and insight into real corporate governance challenges. Our advanced analytics capabilities, combined with our expertise working with boards on legal, governance and communication matters, allow us to provide insightful and actionable advice that leads to better corporate decision making.

1 Our analysis included 35, small, medium and large-cap, cannabis companies that were listed in Canada and had operations in Canada, 35 large-cap companies that were listed on the TSX and have had consistently high market capitalization for a number of years and 35 small-cap companies who have been listed on the TSX at least since 2013. We analyzed the annual MD&As for the relevant fiscal year ending in 2018.